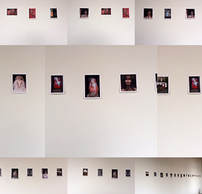 ​Migration has been a constant narrative in the McLafferty family’s itinerant history. From their ancestral roots in Ireland to contemporary Scotland, and now here in Australia, the complexities of identity formation and the affects of diaspora are the narratives that artist Annemarie Murland has employed to structure the exhibition, Stories of Origin. As a collection, the video installation and series of digital portraits act as an aesthetic archive that reveal and record the artists lived and felt experience of cultural diversity and a longing to belong.

The exhibition is developed from a catalogue of documentary photographs of the Calton area of Glasgow [2007], black/white analogue and digital colour portraits of the artist’s daughters taken over a twelve-year period ­­[2001- 2013]. Through a process of overlay the images are framed to offer a visual rethinking of who ‘we’ are in relation to the spaces we occupy and as a result stories past and present become fluid.

In a universal sense, the works are intended to pay homage to the generations of migrant women whose identities were formed in this place. To this end the works visually rupture the picture plane by deconstructing/reconstructing traditional signs and symbols that offer the viewer new readings and meanings of connection.

As cultural theorist, Nikos Papastergiadis says: ‘The power of art, in part, is fuelled by its ability to rip meaning from one context and insert it into another.’ And, it is within the context of image production that the origins of this story lay.